Travel and spread the Love and Peace :D 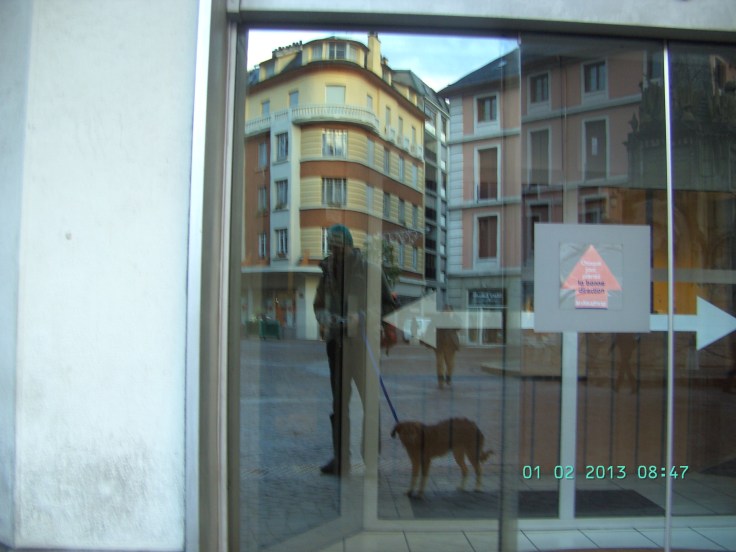 sometimes you don’t want to look too closely at your face in the morning after a night sleeping on the town…:)

Sunshine and bench; perfect combination for morning break in a park 🙂

And last but not least, our friendly chocolate 🙂 rewards for intrepid adventurers always welcome 🙂

By the way, if you read this blog regularly, you know we are trying to get you interested in our campaign 😀 so you donate for homeless cause 😀 Thank you!

As this post comes into blogexistence, we are somewhere close to Geneva…
Will keep you posted 🙂
Love and Peace

Next 44 days in my and Evelyn’s life…

Sometimes you make a decision that could affect your life in every way possible. I think what I am about to do with my dear dog Evelyn is one of those decisions.

Can we have 2 and a half minutes of you attention to see OUR TRIAL CAMPAIGN VIDEO? 😀

sorry for a low quality, it was recorded with a digital camera not designed to make great videos 🙂 and we had a shaky “accident” during filming…and the background noise is too strong. I am working on another one now.
More about campaign in a next post with a new VIDEO and a link to our campaign site on INDIEGOGO… 😀

from Evelyn and Muppet

To friends known and unknown…

I am writing this letter, hoping that is going to reach you in far lands.
It has been more then a few moon phases since we have seen each other.
In this period you were on my mind in certain special moments; it was nice to remember our time together and experiences that we shared. As I think about these moments I am hoping soon we will experience new and exciting time together.
I wanna THANK YOU for  the words of advice and a words of kindness that you shared with me in some of our time together. I appreciate a friend’s advice or opinion and even if it is different then mine I still learn from it.
I hope that you are also learning from me and understanding that my words are flown out there with the good will and good spirit…
Even though I never intend to hurt you I know that people sometimes feel hurt or offended regardless of your words and actions.
In any case I am sorry if this has happened between us.
I would like to tell you that recently I prefer action to words. I think it says more about honesty of somebody then any word can express.
I try to live a life of truth now and as I don’t have a need to lie to myself then I don’t lie to others too.  Of course I get of this path sometimes, but less and less as I am moving on.
I have traveled a lot this year and my travels have enriched my life tenfolds.
I am happy to share these new experiences,ideas and knowledge with my old and new and still unknown friends. For this I will continue to follow this path of my heart and intuition as this is the only path I know now.
I would like to quote something from a beautiful book that I am reading at the moment:
“Tell me a story, Pew.
What kind of story, child?.
A story with a happy ending.
There is no such thing in all the world.
As a happy ending?
As an ending.”

The book is called “Lighthousekeeping” by Jeanette Winterson.

So I say goodbye until our next meeting as it will arrive in a good time.

Short stories behind photos no.2 from our road trip :D 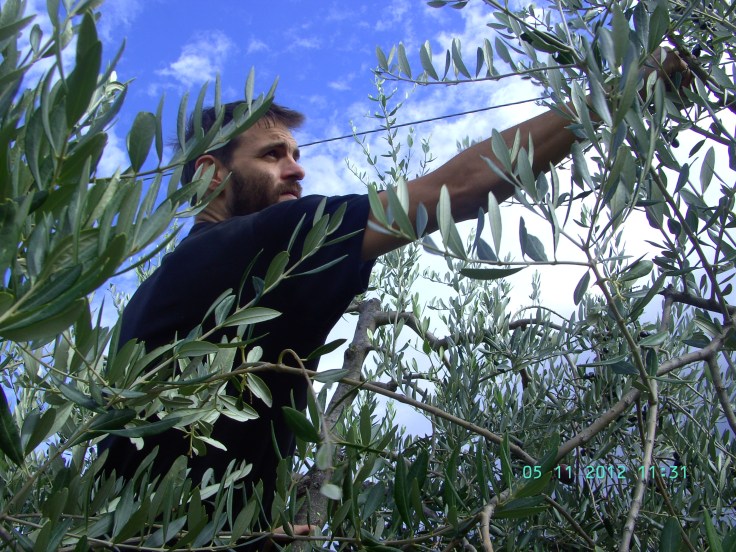 In Toscana Italy, with friends and lovely hosts…

Up in the olive tree enjoying the picking of olives; 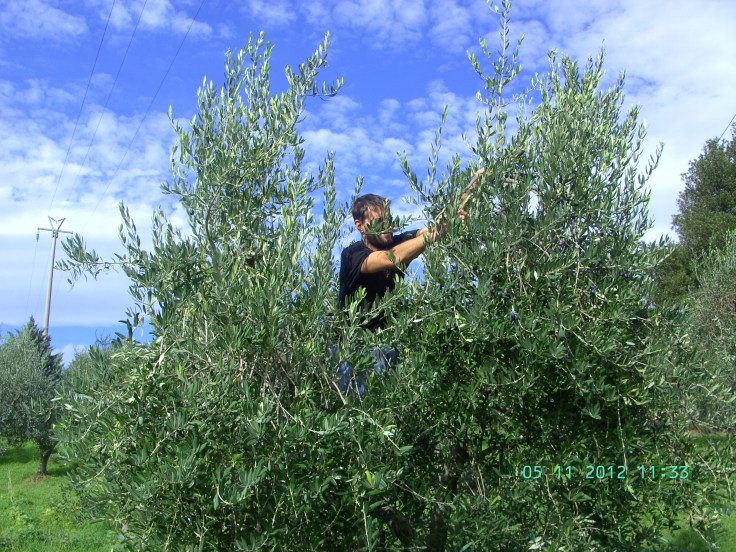 in total connection with a tree 😀

Waking up in Moravice train station, after few smiles and comments of people towards Evelyn we walked up 2km to get to main road and hitchhike. 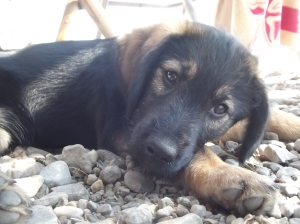 But after few hour I realise there is not enough cars, I was even counting them 😛 and weather was very gray; so I went over to three guys that were having a little break in a bar nearby and asked them if they would like to by some tobacco from me; I had it already rolled into cigarettes and I said I am selling it to get the money for a train to Rijeka the non smoker in the group wanted to just give me the money but I left two packets to his friends to try. So now with 40kn in my pocket I went back to station and bought a ticket to Fuzine, which is few station before Rijeka. We hoped on a next train around 2.30pm and we arrived to Rijeka with no problems meeting two interesting girls in a train who were going to some student conference in Rijeka. While waiting to meet my dear friend from childhood, Evelyn and I started talking to a guy all Rijeka knows as Brada; he is homeless for more then 15 years, but from conversation with him he doesn’t seem to be bothered by that. He was very interesting and we exchanged views on many different fields and I got some usefull info from him. He also gave me a lot of fruit and I gave him my sleeping bag after finding out that his one was stolen. Next time in Rijeka I will look for him and maybe we can have a lunch together.

When my mate Goran arrived we went for a walk with Evelyn and his dog Lajka; he is a vet and since I know him he always had dogs; so of course I asked him many questions about Evelyn and he liked her very much. After a walk he kindly gave us alift to Lovran where we quickly found our dear friends that we met on a rainbow gathering ot so long ago in island of Vir near Zadar,Croatia. 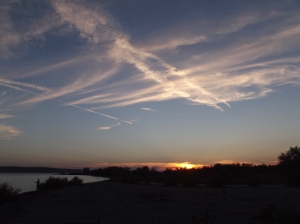 In Lovran there was traditional 3 day festival called Marunada, it is festival of chestnut and my friends had a little table in old town where they served food, tea and coffee for free 😀 We joined them as they played music and we slept that night behind the main church on some beds; it was a warm and dry night so we had a good sleep… and I also got my camera back from one of my friends who kept it for me as I left it in Vir… at that time I wasn’t sure how long will I stay there but as the festival only started that Friday we decided to stay one more day at least.

check out Evelyn’s blog for her view on this trip 😀

We traveled with dear friend I met in rainbow gathering in island of Vir near Croatian coastal town of Zadar.

I have plenty photos, but now as i am using public computer my time is running out to post them, later I will go to internet cafe and start writing stories from first week of Evelyn and my first ever road trip together 😀

woof woof and greets from a man and a dog